So much for a “fundamental rethink of social housing in this country”. The Tory Social Housing Green Paper – finally published on August 14 th after having been announced in September 2017 – is seen by most commentators as a damp squib, unlikely to do anything to revive the social housing sector, or to remove the damaging stigma felt by many tenants around the country.

Despite the statement “Social housing remains central to our supply ambitions, providing a stable base that supports people when they need it”, it is not clear that the Government thought the issue of social housing was serious enough for any proper consideration. The Green Paper was sneaked out, trailed first in a press statement and then a short summary document, early in the morning, with the full document released later in the day – outside the main Parliamentary session, in the middle of everyone’s summer holidays. No proper scrutiny, no formal discussion for some months, and a media strategy that is cynical in the extreme. Could there have been any less sense of importance given to this topic?

There is a total contrast between this Green Paper, prepared and delivered with all the resources of government, and the one produced by Jeremy Corbyn and John Healey for Labour earlier in the year. One fiddles at the edges and is going nowhere, whilst the other is a genuine agenda for reform and the re-establishment of social rented housing at the heart of the housing system.

The Social Housing Green Paper – “A new deal for social housing” the first-ever housing green paper from a Conservative government – does at least get rid of some more of the Tories’ worst plans for social housing. No less than seven policies announced under the Housing & Planning Act 2016 have now been disposed of, including making councils sell off their highest value council properties, and ending security of tenure for council tenants. However, it fails to show any grasp of the ways in which social housing could help overcome the housing crisis, and especially the desperate need to provide many more genuinely affordable homes.

Though the Government says it has been listening to council and Housing Association tenants, they might have been astonished to hear that the key policy proposal for addressing the stigma they often experience is to set up street parties and best neighbourhood competitions, to “bring people together across housing tenures and generate a sense of pride”.

The Green Paper tries to blame landlords for the growth of stigma, ignoring their own Party’s actions and policies. In truth, they cannot really understand why anyone would want to be a tenant, and so instead of realistic suggestions for increasing the value with which social housing is regarded, there are yet more proposals to help tenants to move into home ownership. The Green Paper shows little understanding of how social housing estates have changed since the Right to Buy. In some places RTB has brought about sustainable home ownership, but in too many others it has simply led to the enrichment of individuals who have either let at much higher rents, or sold on for others to do so. It has been a huge policy error to allow social housing to become private rented housing in such large numbers. Mixed tenure estates involving high levels of private renting are harder and more costly to manage, but the paper does not discuss these issues, let alone propose how to deal with some of them. A separate document published at the same time announces a consultation on proposals to change the way Right to Buy receipts can be spent, and suggests “reforming the commitment” that every additional home sold is replaced on a one-for-one basis nationally, a commitment that has never been honoured in the 8 years of the Coalition & Tory governments.

A proposal to introduce performance league tables on which funding for housing will be based has been met with lukewarm reaction. More significantly, borrowing caps will remain in place, and there is no commitment on the numbers of social housing dwellings to be built, nor any funding to achieve an increase. This is without doubt accepted by most commentators as the most crucial housing issue today, but not, apparently, by this government. By contrast, Labour’s commitment to build 100,000 genuinely affordable homes a year, achieving 1 million over a decade, is not only explicit, but underpinned by a series of policies to make this target achievable, the severity of the challenge being matched by the Labour Party’s seriousness about how to meet it.

There are a few positive points in the Green Paper. It heralds a return to proper regulation of consumer standards (though experience tells us that a centralised, overly financially focused approach does not work and local authorities should be given more of a role in holding Housing Associations to account), a clearer framework for dealing with complaints about landlords, proper tenant involvement, and a return to a tenants’ voice organisation of some sort – though there is some irony in the Tories trying to become the champions of tenant involvement, when one of the Coalition Government’s first acts was to scrap the carefully-constructed National Tenant Voice set-up. Our view is tenants will see straight through this.

Also suggested is a return to a proper partnership with Housing Associations, and more of a level playing field between council and housing association landlords, taking a step back from a world in which this part of the non-LA part of the sector loses its purpose of meeting housing need for the public good. However, the start of the voluntary Right to Buy for Housing Association tenants, announced in the same week as the Green Paper, establishes a £200m fund to enable one-for-one replacements which could have been far better spent on building new stock.

Finally, there is a welcome proposal to review the Decent Homes Standard, introduced by Labour in 2000, but not reviewed since 2006.

So no new money and no change to the borrowing cap which would allow councils to get on with building much-needed social rented housing, no recognition of the housing crisis caused by their own welfare benefit policies, and no real attempt to tackle the stigma associated with public sector housing. Is anyone ready to believe the Tories’ claim that they have been listening? 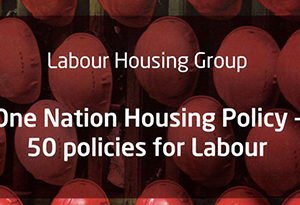 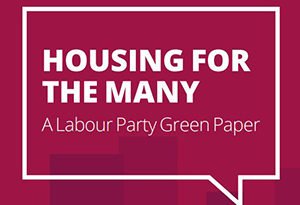 Labour Party Green Paper Housing for the Many